At the age of 12, after eight years of abuse, Nancy was impregnated by her grandfather. Terrified and alone in the big city of Kampala, Uganda, Nancy didn’t know where to turn.

The Remnant Generation rescued Nancy from her dangerous situation, providing her with a safe place to stay and the medical attention needed for Nancy to give birth to a healthy baby.

Nancy’s life was radically changed, but there are so many more lives to be saved.

The Remnant Generation can help as many as 30 girls just like Nancy every year. At an average of $600 per pregnancy, they need $18,000 each year to meet this need. The staff at Remnant Generation often give up their own salaries in order to pay the hospital fees.

Countless young girls face these horrors in Uganda every year. Without intervention they end up on the streets and their babies may die. You could be the one to rescue them.

Will you provide a girl with the medical attention that she will need to safely carry her baby to term? Will you help provide the love and care that she needs?

These kids need our help. Together, we could rescue lives.

We received Brenda a 14-year-old teen mom through the Lubaga Hospital teen safe space. She was defiled by a neighbour who kidnapped, abused and abandoned her in an unfinished building in their neighbourhood. He threatened to harm her should she reveal what had happened to her. Brenda was in shock and did not tell her Auntie whom she lived what had happened to her, afraid that the perpetuator would kill her as he had warned. What she did not know was that she had conceived as a result of this incident, and of course, one cannot hide a pregnancy forever.

When our team was called to support her, Brenda was weeping painfully; she was depressed and was struggling to accept that she was pregnant. She refused to eat as an attempt to end her life. Brenda needed counselling and mental health support. Even though the perpetrator was imprisoned and her case is being pursued, Brenda’s life was being threatened. She needed a place where she could feel safe, protected and loved.

After a series of counselling sessions and specialized care to for Brenda, she accepted her baby and even began to look forward to holding him in her arms. She had her antenatal care reviews until she was 35 weeks along, when she got preterm labour pains. On October 13th, Brenda underwent an emergency caesarean section and gave birth to a baby boy – she named him “Joy”.

At birth, Joy was in foetal distress. Joy was asphyxiated with a very low oxygen score of of 4/10 and weighed 2.6kgs (5.7lbs). He was rushed to the neonatal unit in a critical condition where he spent 4 days. They were later discharged in a fairly good condition. One week later, however, Joy’s condition worsened and he was readmitted because he was still having difficulty breathing. After 3 days of close monitoring and regular tests, results indicated that the baby’s heart had a small PDA. According to the cardiologist, this should close by the time he makes 3 months, but we were advised that if it fails to close then surgical measures will be taken. Brenda is grateful as she testifies that it could have been a life lost if we did not intervene. She says

“I am forever grateful that The Remnant Generation saved my baby and I.”

Brenda is a strong girl and she loves her baby very much. Baby Joy is still in hospital. It costs about $57 per day for the medications, special tests, and general facilitation for our nurse and teen mom while in hospital. Join us in believing for complete healing. 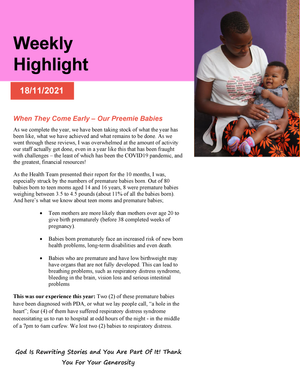 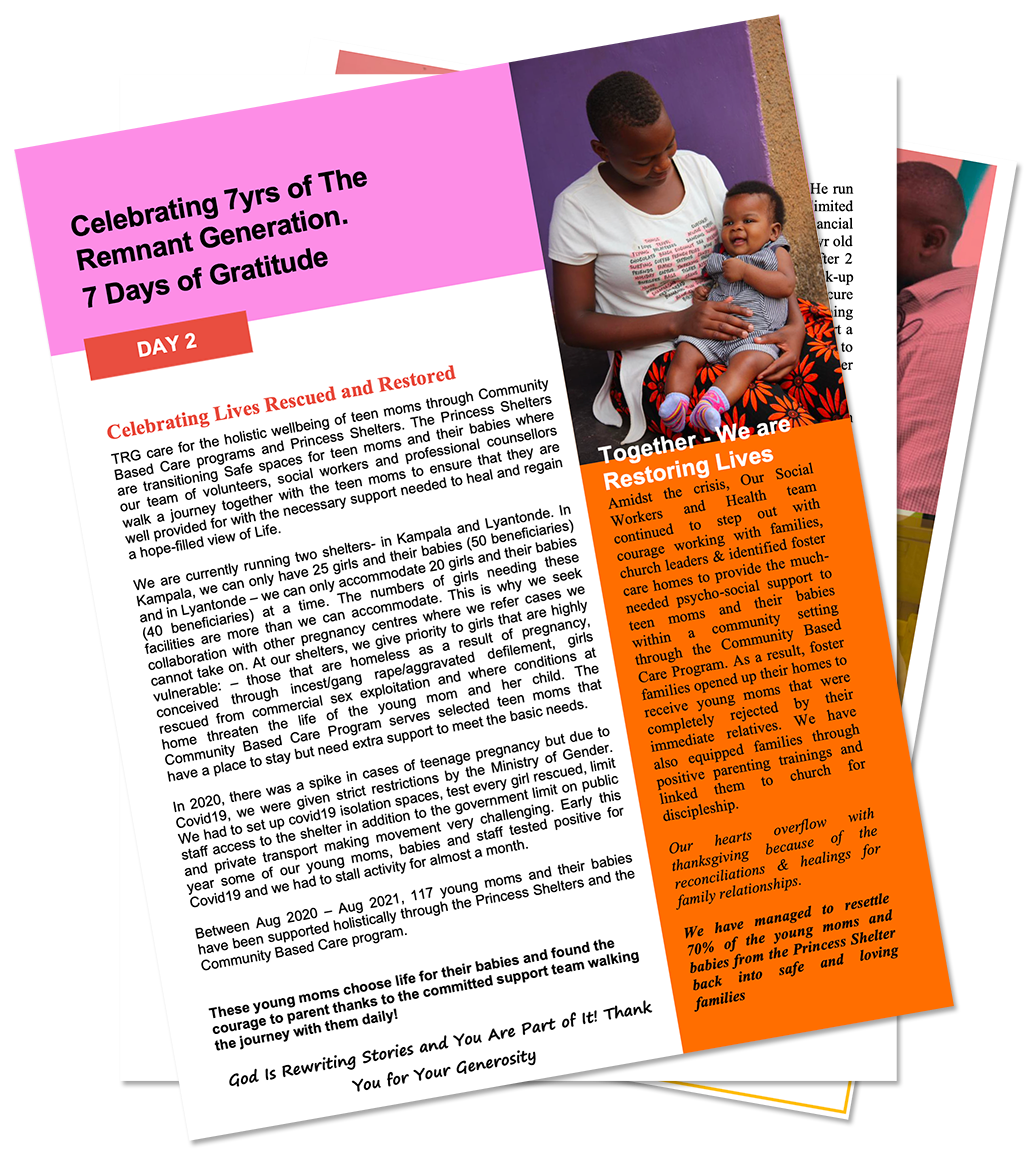 When her mother discovered that Pasha was pregnant at 12 by her stepfather, she got Pasha an abortion and abandoned all three children to their grandfather. When we met her at age 14, she was complaining of terrible abdominal pain. Pasha assumed this was because they hadn’t eaten in three days. Their grandfather was upset ofer their cost of living and had kicked them out of the house.

Pasha is now six months pregnant. After being reunited and accepted by her biological father, her suicidal tendencies have ended and she found forgiveness for her mother and grandfather. Pasha is now able to express herself, socialize with her colleagues, and smiles often.

Check box if you wish to receive regular information